2020 Black Forest Keepers of the Keys

The tradition of “Keeper of the Keys of the Forest” was started in 1960 to honor members of the community for their service to Black Forest.

Shari and Rob Conley moved to Black Forest in 1986 and their three daughters were born and raised here. Shari says that when her children were young and as she drove them from one activity to another, she could not help but notice the energy of the volunteers working at the Black Forest Community Center (BFCC). She was inspired by their selfless dedication. Time and time again, she thought, “Why do I keep driving into town when the special community I want for my kids is right under my nose?” 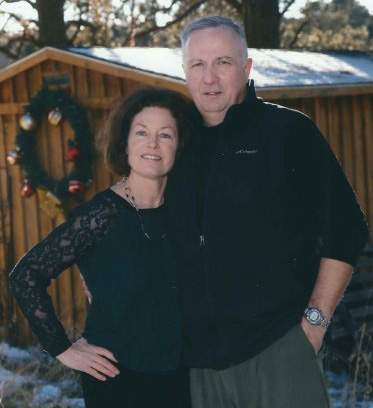 Both Rob and Shari are U.S. Air Force Veterans. As a cadet at the US Air Force Academy, Rob first saw Black Forest and the BFCC Hall at a squadron party. He’s loved it ever since. In preparation for the advent of GPS operations, Rob and Shari both received assignments to Falcon AFB (now Schreiver AFB). After living in crowded L.A., they were thrilled to settle in Black Forest. The family is thankful to call Black Forest their home.

Today, Rob continues to work long hours at Schriever AFB as the Chief Engineer for a Missile Defense Agency command and control team. Several other members of this highly dedicated team also live in Black Forest. When Marc and Robin Herklotz lost their lives in the Black Forest wildfire, Rob organized a group of engineers from GPS and MDA teams who had previously worked with Marc and Robin to help construct the Fire Memorial in the Log School Park.
Even with his work responsibilities, Rob finds time to serve as chair of the Black Forest Community Club (BFCC) Board of Directors.

Shari, now retired from the Air Force Reserves and self employed as a Math/Science tutor, has always looked for ways to connect her family with the community. While her children were young, she resurrected the After-School Enrichment Program at Edith Wolford Elementary. She also volunteered for the Athletic Association of Black Forest for 10 years. She became a Girl Scout leader for a local Black Forest Troop. When the troop marched in the BFCC Turn of the Century Festival parade in homemade period costumes, Shari was bitten with the festival bug. As a result, Shari went on to coordinate the Festival parade for several years, with Rob’s assistance building spreadsheets to generate custom reports for the various parade volunteers.

Following the devastating 2013 Black Forest fire, the community questioned whether the BFCC could possibly still hold a festival and a parade. Eddie Bracken and the Conleys responded along with the rest of the Festival team. The Conleys’ gift to the community was the construction of a very moving 2013 parade to show the resilience and heart of the stricken community. The parade was led by Fort Carson’s Mounted Color Guard. The parade also honored a contingent of Woodland Fire Fighters who marched in full gear to the cheers of the crowds. The grand finale was our local heroes: first responders and multiple fire departments who had put their lives on the line to save the forest and its people.

Many people in our community have come to know Shari for her leadership of the Black Forest Festival every year since 2015. Of the many BFCC community outreaches, the Black Forest Festival is the largest, drawing crowds of several thousands. Dozens of volunteers work under Shari’s leadership to make this event happen. It’s no surprise that Shari is a marathon runner. Organizing the festival is akin to running a marathon. Because the festival has grown so large, this year Shari will be assisted by a new Festival Executive Committee.

Under her leadership, the Festival has grown in attendees and activities. Shari has brought a Western Town, additional demos, barn dances, the Kids’ Craft Corral, kids races, pony rides, a jailhouse, a log school classroom experience, and has also initiated the Friday night Biergarten and of course the Return of the Outhouse Races.

Having led the BF Festival 2002, Shari realized that it would be best to wait until her kids were older before taking on the task again. In 2015, running the festival became a family affair for the Conleys. Rob prepares spreadsheets. Daughter Gillian builds digital publications and logo designs reflecting the unique Black Forest culture and values. Daughter Erin organizes and directs the newly-revived Outhouse Races (2016 to 2019). From afar, daughter Caitlin wrote a play about the history of the Black Forest that was performed at the Festival. She also helps write scripts for the parade emcee including a speech for last year’s 90th anniversary festival. Caitlin, now working on the East Coast, flies in in each year to work at the Festival – not wanting to miss the event.

The Conley family fortunately did not lose their home in the Black Forest wildfire. They’ve helped community members who did. They’ve worked on the annual Black Forest Fire Remembrances. Shari has helped connect volunteers with fire victims. The Conley family donated green trees from their property for transplanting. When the BFCC purchased the backyard property that had been destroyed by fire, Shari was impressed and energized by the volunteers who worked thousands of hours to clean up the property. She volunteered and also arranged for Air Force Academy cadets to come and help. They reclaimed the property to something that can now be used for BFCC outreach events.

In January, Shari polled the community regarding what activities they would like to see at the BFCC. The Black Forest Community Facebook page received over 100 comments. There were many great suggestions including a farmers market. The beautiful grounds of the backyard property, land that was once desolate and destroyed, is now home to a growing farmers market. Shari, with help from daughters Gillian and Erin, has spent numerous hours assisting the Market Managers of this very successful market with attendance averaging between 700 to 1000 visitors every Saturday.

The Conley Family loves Black Forest and wholeheartedly appreciates the opportunities that this grassroots community provides to contribute as volunteers of many extraordinary events. When it comes down to it, Shari and Rob can’t imagine a better place to have raised their kids.